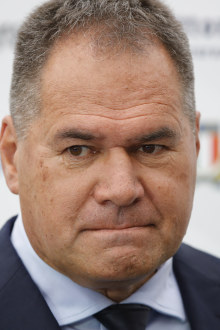 Eddie Jones in, Dave Rennie out as Wallabies head coach

“It is a wonderful opportunity for me to be able to come home to Australia and lead my nation to a Rugby World Cup,” Jones said. “It is going to be an immense period for Australian rugby.”

Jones also coached Japan from 2012 to 2015 and led the team to an upset win over South Africa at the 2015 Rugby World Cup in England.

“It is a major coup for Australian rugby to have the best coach in the world return home to coach the iconic Wallabies and to oversee the Wallaroos program,” Rugby Australia chairman Hamish McLennan said. “Eddie’s deep understanding of our rugby system and knowledge of our player group and pathways will lift the team to the next level.”

“I would like to thank Dave for his hard work and effort with the Wallabies,” Marinos said. “We are grateful for all that he has done for Australian rugby.

“Dave has been instrumental in developing much of the depth that we see in and around the current Wallabies squad. There are a number of players that are genuine World Cup possibilities because of opportunities that Dave has provided.”

Several former Wallabies commented on social media on Rennie’s sudden dismissal and the return of Jones.

“Need a Bledisloe Cup and Rugby World Cup semi and Lions win to justify the decision. Strap yourself in for the ride.”

“The Rugby Football Union gave Australian rugby a true gift when they sacked Eddie, putting in play one of the most talented, successful and hard-working rugby coaches the world has seen,” Poidevin told The Sydney Morning Herald.

“Eddie produced the best record of any England coach in history with a 72 per cent win rate and is arguably without peer in delivering success for multiple teams in Rugby World Cup campaigns.”