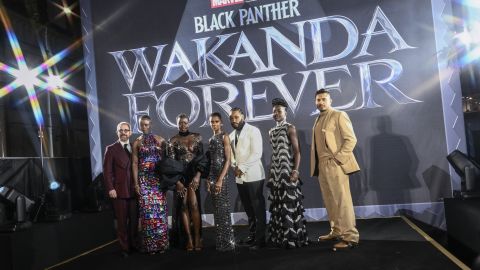 Marvel movies are returning to China after almost four years

China has reopened its doors to Disney’s Marvel Studios for the first time in almost four years, with two new film releases secured in the world’s second largest movie market.

“Black Panther: Wakanda Forever” will open in China on February 7, roughly three months after its global debut, while “Ant-Man and the Wasp: Quantumania” will open on February 17, Marvel Studios announced on Chinese social media Tuesday.

They’re the first Marvel films to grace the big screens in the country since the release of “Spider-Man: Far From Home” in July 2019, according to Paul Dergarabedian, a senior media analyst at Comscore.

Since then, Marvel’s last eight movies have not been shown in the country, though that will drop down to seven with the upcoming “Black Panther” release, Dergarabedian said. They include “Thor: Love and Thunder” and “Doctor Strange in the Multiverse of Madness,” which debuted elsewhere in 2022.

Marvel’s woes were part of a broader slowdown in China for Hollywood producers, who have struggled to get their films into the vast market recently.

Last year, blockbusters such as “Top Gun: Maverick” and “Spider-Man: No Way Home” didn’t make their way into cinemas there.

The challenges for US studios can be attributed to a multitude of factors, “from Chinese regulators greenlighting less foreign films overall to qualms about each particular film,” according to Dergarabedian.

But he suggested that the latest could signal better times ahead between Hollywood and China.

“The symbolic importance of these steps toward more US-based films being released in China is certainly a positive sign moving forward,” Dergarabedian told CNN.

One reason why Marvel may be seeing a reversal of fortune is Disney’s successful release of “Avatar: The Way of Water,” he said.

The film premiered in December and was one of the few foreign productions to hit Chinese cinemas in recent months.

It has quickly become a box office sensation. Comscore data shows that “Avatar” has raked in more than $1.9 billion globally, making it the sixth highest-grossing release of all-time. China contributed $217.4 million to the total haul.

“The doors that were opened to Disney’s ‘Avatar: The Way of Water’ have benefited both the studio and the exhibition community in China,” said Dergarabedian, referring to movie theater operators. “This likely played a part in this welcome shift in playability for Marvel films in the country.”

In 2020, it became the biggest the world’s movie market, as its theaters were able to recover from the initial stages of the Covid pandemic more quickly than those in North America. The trend continued in 2021.

Last year, the balance tilted again. US theaters bounced back, while China continued to maintain a strict “zero Covid” policy that kept many of its cinemas in limbo. That put North America’s box office ahead once more in 2022, generating more than $7.5 billion compared with China’s $4.4 billion, according to Comscore data.

The lack of US movies in China in 2022 also “negatively impacted revenues there, as reflected in a 40% downturn in overall box office” compared to the year before, noted Dergarabedian.

But “2023 is shaping up to be a much stronger year overall for theaters around the world,” he said. “And having US films more in the mix in China is great for studios, the filmmakers, theater owners and of course the fans.”

— Juliana Liu contributed to this report.