What are longevity noodles, a ‘lucky’ dish eaten during the Lunar New Year?

During Lunar New Year, longevity noodles are eaten in China and countries like Malaysia, Singapore Vietnam, and South Korea that celebrate the festival. Image courtesy: Flickr

The Lunar New Year is here. In China, it’s time for festivities, food, and wishful thinking. In a country that is said to have suffered the “worst COVID-19 outbreak in the world”, who wouldn’t wish for some luck? Well, it can be served on a plate and they call it “longevity noodles”.

These noodles, it is believed, ensure a long and prosperous life. Hence the name. They are called yi mein or e-fu noodles, depending on the dish they are served in. These long spongy egg wheat strands are a must-have during the Spring Festival – celebrations that occur in the run-up to the new year.

Traditions dictate that these noodles can’t be cut by the chef. They need to be eaten whole. No breaking it before eating. It’s believed that the longer the noodles remain intact, the longer your lifespan will be. The whole noodle should be eaten bit by bit without breaking into pieces.

Diana Chan, who won MasterChef 2017, told ABC Australia, “They don’t cut these noodles when they make them, so they stay very long. The longer the noodle, the longer, healthier and wealthier life you’ll have.”

According to Louise Kwok, who manages a Hong Kong-style restaurant, saying “long life” in China is like saying “congratulations” or even “have a nice day”. Apart from the Spring Festival, it is common to have these noodles on birthdays or weddings. “… Any occasion when you want an omen of a long life,” she said. 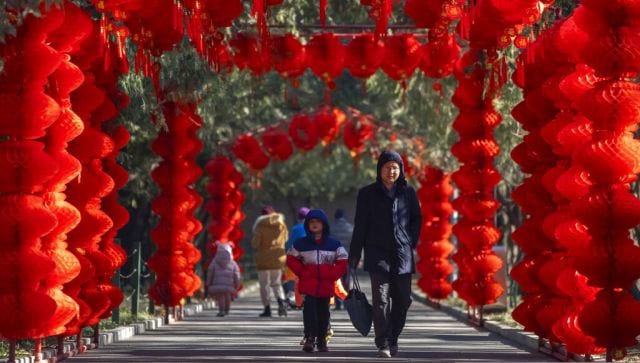 Lunar New Year celebrations are filled with traditions. The long-life noodles are served at the end of a big feast. AP

These noodles are deep-fried and made with egg, wheat flour and bicarbonate soda. They are golden yellow; spongey and chewy.

In Guangzhou and Hong Kong, where yi mein are from, the weather is hot and humid. Hence fresh noodles cannot be preserved for a long time. People started frying them to remove the water, shaped them into discs and dried them.

Now they are packaged and sold in many Asian grocery stores.

They come at the end of a meal

The longevity noodles are served with oyster sauce and finely sliced shiitake mushrooms and bok choy; or with bok choy in a simple broth that’s lightly seasoned with soy and ginger, according to Serious Eats.

They can also be topped with crab, lobster or prawns. For those who want to keep it simple, even cabbage and mushrooms will do with soy and sesame oil. What you need is some juicy sauce that the noodles can soak in.

“The most traditional way is actually to just put aromatics like scallions and garlic, along with freshly-ground red chilli powder on top of the noodles, sear it with vegetable oil and dress it with soy sauce and black rice vinegar. We call these Spicy Hot-Oil Seared Hand-Ripped Noodles,” Jason Wang, CEO of Famous Foods, a New York restaurant tells CNN Travel.

They are served at the end of a big feast that includes lots of dishes. Author Magie Zhu writes in her cookbook Omnivore’s Cookbook, “the noodles are like the pumpkin pie dessert… you know you’re too full to eat it, but feel that the occasion would be incomplete without eating some of it.”

The other long-life noodles

Yi mein are the noodles that Cantonese speakers eat. But many provinces across China have their own version of the longevity noodles. In the north of China, where it is difficult to grow rice, the noodles are made of wheat.

But even flat rice noodles, hokkien noodles or spaghetti can double up as long-life noodles.

“The exact type of noodles varies, but the idea remains ‘long noodles for long life,’ and any long noodles serve that purpose,” Wang told CNN Travel. 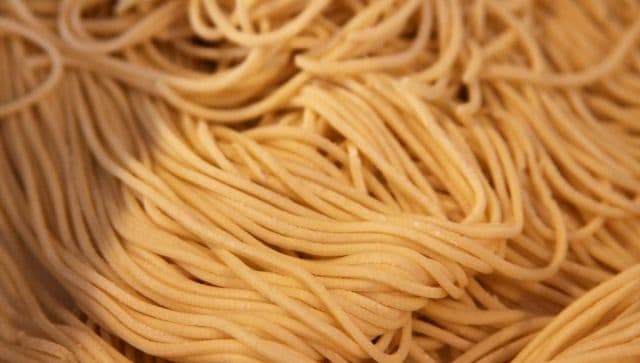 Longevity noodles symbolise long life and are to be eaten without breaking the strands. Image coutresy: Flickr

The history of longevity noodles

How did eating long-life noodles become a tradition?

The tradition dates back to Emperor Wu of the Han Dynasty (141-87 BCE). He once told his ministers that he’d heard that a person with a long face has a long wife. He could not change the length of his face, of course, according to several blogs.

That’s when the emperor decided to start eating long noodles as the word noodle and face sound similar in Chinese. It became a ritual that stuck.

Zhao Rongguan, a leading scholar in China, told CNN Travel that the noodle culture flourished during the Han Dynasty. “It was the era that laid the foundations and techniques of modern-day noodles. But to say that Emperor Wu was why we have longevity noodles, I’d say it’s ridiculous internet heresy,” he said.

Chen Yuanpeng, a professor at Taiwan’s National Dong Hwa University, said that the lore has been shared so many times that many people believe it is true. “…we can’t dismiss the story – even if it probably was just a myth… it has also become a part of the culture and history of longevity noodles, which has been documented for more than 1,000 years,” he told CNN Travel.

Longevity noodles are so popular that they have been adopted by other countries that celebrate the Lunar New Year like Vietnam, South Korea, Singapore and Malaysia.

What can we say: Long live the myth of longevity noodles.