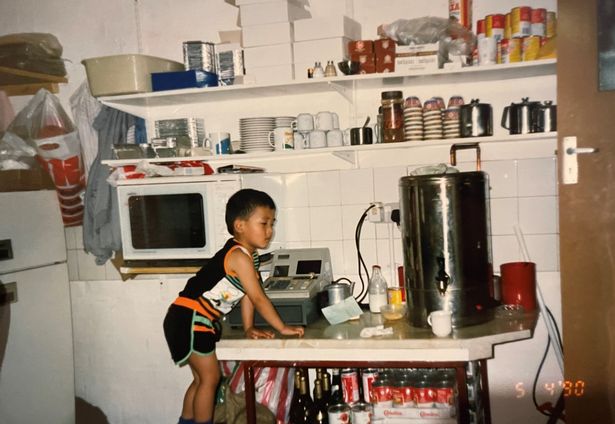 A “homely” family-run restaurant has been at the heart of Liverpool’s Chinatown for over three decades.

Back in 1990, North Garden Restaurant opened its doors on Nelson Street and over the years has welcomed up to four generations of loyal customers through its doors. The business began with Mr Chiu, whose family was impacted after the Cultural Revolution in China and pushed into deep poverty.

Mr Chiu lost his mother at a young age and as an adult he found work mining phosphorus on the coast of Australia, before moving to Hong Kong to learn his trade. Mr Chiu worked and saved to move to the UK, living in London, Swindon, Leicester, Sheffield and Leeds before settling in Liverpool.

As part of the Liverpool ECHO’s How It Used To Be series, we spoke to Mr Chiu’s son, Henry, 35, about his early memories of the restaurant and how the family business has changed over 30 years in the city centre. Henry, manager of the North Garden Restaurant, told the ECHO: “My dad had a good group of friends around him and then he became head chef of New Capital right across from us, which was the Blue Funnel.

“From there he tended to all the weddings and would get all the materials and make food for over a hundred people, which was a lot of work back in those days. He was introduced to my mum back in China and they dated for a while and then started a family.

“They had the opportunity to rent out next door, number 28 and the North Garden restaurant has some symbolic meaning. It’s actually the name of the first restaurant my father as a child went to.

“Back then, it was very difficult and the owners always used to give him free buns. He was always very thankful because it was a very warm environment, so he actually named it the North Garden restaurant because of that.”

Have you visited the North Garden Restaurant on Nelson Street? Let us know in the comments section below.

Owning and running the restaurant, Mr and Mrs Chiu would work seven days a week, 12 hours a day or more from 4pm to 4am, as well as balancing family life. After meeting and becoming good friends with Harold and Joan Sang, the couple became Henry’s godparents who took care of him and his sister, May.

Henry said: “From there they managed to build a brand, build a business. It was a really great integration into almost English society for me.

“In Chinatown, you eat rice, meat, vegetables, but I remember being introduced to egg soldiers, scrambled eggs, English breakfast, roasts. That was a great integration into English culture as a kid.”

As a kid growing up, Henry said the city centre was like his “playground” and that he remembers playing on the massive swing in the Black-E and making “lifelong friends” at the Hoi Yin Association next door to the restaurant, as well as the Wah Sing Chinese Community Centre. He also has fond memories of the “copious amounts of food” and before the alcohol licensing laws changed, seeing customers “rush to the restaurant” to eat through to 2am or 3am.

Henry said: “When I was a kid, I would just be running around with my parents watching over me, on the weekdays when I was free after school. It always used to be very lively and that’s penetrated into me and made me a more sociable person, when I’m talking or doing events.

“I remember how I was the brat of the family, so I’d be running around the restaurant and all the uncles and aunties used to grab me and pinch my cheek and everyone started doing it so my cheeks would always be red. My parents weren’t very good at English and I’d come from school and be on the table in the restaurant crying because I didn’t understand and my parents couldn’t help me.

“When I used to cry, the customers used to come over and help me, with my maths and English. That was really nice and made you think, people want to help.

“My father used to always take me to the markets and he used to put me in the trolley and I used to stack the items into different places. You learn these little things, like you go to the fresh fish market and your parents are pressing the fish and looking at the eyeballs and opening the gills to see if they’re red.

“Those were little things that teach you what’s freshness, how to get great food, the basic foundations of how to eat wonderful food. The idea with the restaurant is mixing great food with great company and family, which is why I’ve loved working in the restaurant for all these years.”

Over time, the family have expanded their menu, maintaining traditional dishes but also trying new trends for different clientele. Henry said: “At the start, years ago, chicken in a basket, that was the thing back then people always used to have.

“You want to be able to provide for the customer in one aspect but then you also want to do it in a way that meets your standards and that’s really important. It’s that balance of keeping to thing customers love.

“Like Chinese customers like cold chicken feet, deep fried pork intestines, pigs blood and it’s one of them things finding the balance and know what trends are and go back and forth with it.

“We’ve been very fortunate that all the recipes were passed down from my father to then my mother and then eventually in the future to me. We’ll keep that tradition going but add new things, keeping relevant but adding to the foundations.”

Henry described the restaurant as “homely” and “warm” and said the family are definitely looking towards the future. He began working in the restaurant after university in 2009 and said over 30 years on, the business still welcomes loyal customers, with three or four generations still passing through their doors.

Henry said: “We’re very thankful. We’re really thankful for the community and all the customers who’ve come to the restaurant because without them, we’re nothing.

“The conversations you have in the restaurant are so wide and varied. Sometimes you’re talking about China, politics, love, family – there’s always something.

“To work and help and support the family, it gave me a whole different meaning of giving back to the family. My parents are very happy, the fact it’s been so many years and we’ve been through so much, especially in his current year with the increase in prices and the increase in bills and utilities.

Receive newsletters with the latest news, sport and what’s on updates from the Liverpool ECHO by signing up here