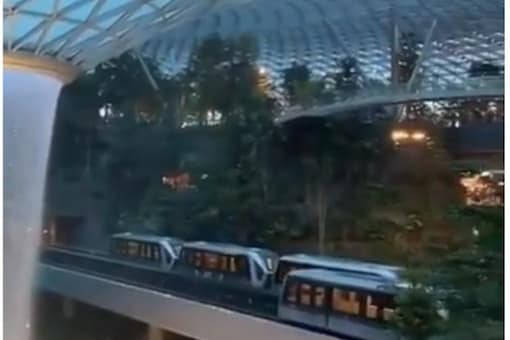 Singapore airport is home to the world’s tallest indoor waterfall.

Wanderlust is stronger than ever and people love exploring new places around the globe. Yet the first thing travellers come across is not some exotic location or the perfect getaway spot but rather the airport that welcomes them. What an ideal vacation it would be to be welcomed by a breathtaking airport before falling in love with the entire destination. The Singapore’s Changi Airport promises just that. It is a destination in itself and a clip is here to prove it. A Twitter user shared the view of the airport from the inside and it looks like the perfect blend of nature and modernity. Here’s a sneak peek of it:

As expected out of a glorious structure like the Singapore Changi Airport, it left social media users in awe. Many mentioned that it was remarkable that Singapore had reached so far after gaining its independence. Others expressed their desire to visit an airport as beautiful as this one. A Twitter user wrote, “Desperate to visit Singapore airport!”

“Wow, I have to visit Singapore, I’ve seen and heard amazing things about it,” another tweet read.

“Bruh why does this looks like the end of a Zombie Movie when they find their little perfect society,” wrote another user.

Singapore is known for its world-class aviation hub and the Singapore Changi Airport has helped it achieve that status. For many, this is a spectacular destination in itself with a ton of activities to keep tourists engaged. Whether it is shopping, dining or entertainment, Changi Airport has something for each tourist. With four terminals and a ten-storey lifestyle hub called Jewel Changi, the airport is an architecture that incorporates the best of both worlds. Perhaps the most picturesque spot is the indoor greens at the airport.

True to its nickname City in A Garden, Singapore has even given green spaces and verdant gardens for travellers to enjoy after a long flight. A stroll around the Jewel Changi will let travellers witness a 40-meter-high indoor waterfall. Its beauty is all the more enhanced by 2,000 trees on all sides. If that was not enough, Terminal 1 has the Cactus Garden, the Sunflower Garden adds to the beauty of Terminal 2 and the Butterfly Garden at Terminal 3 can leave anyone spellbound.

A team of writers at News18.com bring you stories on what’s creating the buzz on the Internet while exploring science, cricket, tech, gender, Bollywoo…Read More
Social Media News
Previous Post
OnePlus 11R Likely To Debut At Upcoming ‘Cloud 11’ Event Next Month: Report
Next Post
Classified documents at Pence’s home, too, his lawyer says