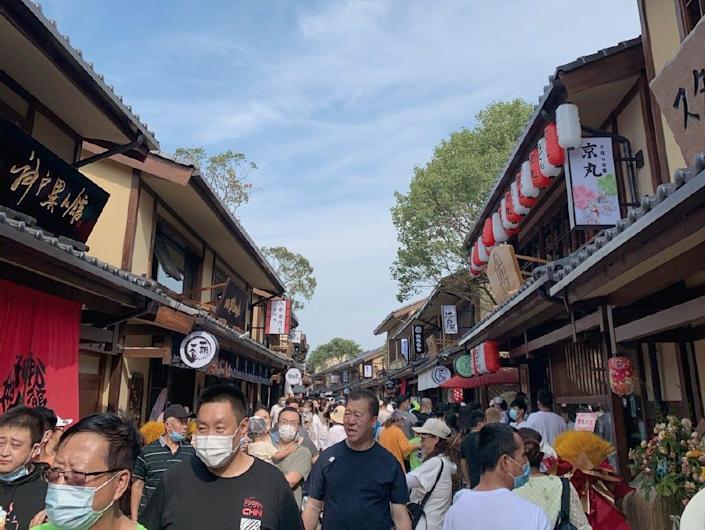 The wrath of Chinese web users has caused the temporary closure of a shopping street in southern China that was built to resemble ancient Kyoto.

The Japanese-themed Tang Little Kyoto project was forced to close its doors just one week after its soft launch on August 21, after web users flooded Weibo, the country’s Twitter-like platform, with posts accusing the location of being a form of “cultural invasion” by Japan, per Kyodo News.

The Japanese-style township is located an hour’s drive from the city of Dalian, in northeastern China’s Liaoning province. The area was specifically designed to resemble the winding streets of the Ninnenzaka and Sannenzaka slopes leading up to the iconic Kiyomizu-dera temple in Kyoto.

Web users were outraged that traditional Japanese goods were being promoted over Chinese products.

“The existence of this Kyoto shopping street is a betrayal of our local commerce in favor of Japanese businesses,” wrote one Weibo user with the ID LengYanYiDing.

Some people suggested that the locale’s existence was a form of “Japanese occupation,” referring to the Japanese occupation of the area during the 1930s and 40s. Weibo users also re-posted a message that said Japanese culture was a “demon” that needed to be “exorcised.”

“Now, we’re going to open this ‘Japan Style Street?’ What about our ancestors who died under Japan’s butcher’s knife and the heroes who fought bravely against the Japanese? This wasteful project is not demonstrative of our national pride. It’s forgetting our roots and the sacrifices of our ancestors,” wrote a Weibo commenter with the ID Mo HongAn.

When Nikkei visited Tang Little Kyoto on September 2, an executive from Dalian Shuyuan told the news outlet that the municipal government instructed them to halt operations on August 30.

It is unknown if the shopping complex will re-open, though it’s only one part of the Tang Little Kyoto district project. Tang Little Kyoto is expected at its 2024 completion date to be a full-sized town in its own right. The developers are set to construct 1,600 buildings, including a healthcare facility, hot spring baths, 83 hotel-style suite units, 1,300 Japanese-style villas, and mini-shopping complexes selling Japanese food and retail goods, per Nikkei.

Nikkei reported that each residential villa in the Tang Little Kyoto township – which is an extension of the city’s popular Jinshitan seaside resort tourist area – is expected to sell for at least $775,000.

Dalian Shuyuan Group did not immediately respond to a request for comment from Insider. The company has not commented on whether it halted construction on the residential complex.

Read the original article on Insider