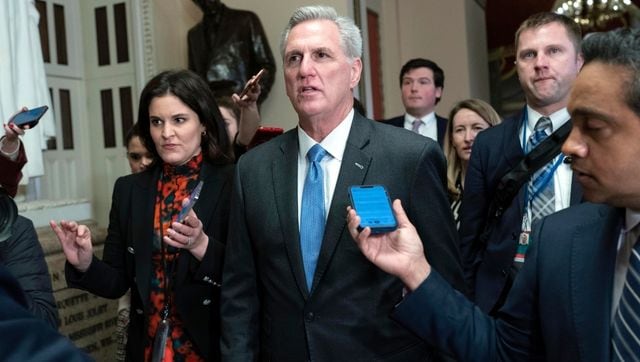 What are hardliners’ rules US House adopts to control Speaker McCarthy

Washington: The set of new rules Republicans pushed through the House on Monday make it easier to remove their own speaker, establish new investigatory committees, and make it harder to raise taxes or spend federal money, and could potentially slow ethics investigations.

The package, backed by the House on a mostly party-line vote, does not detail all of the concessions made by Kevin McCarthy to nail down the votes he needed to be elected speaker — such as the allocation of prime committee assignments — some of which were handshake deals or would require further action by House Republicans.

Republicans said the new rules empower individual lawmakers to have a greater voice in legislation and advance the party’s goal of limiting spending.

“It reflects Republican priorities and the priorities of the voters who elected us,” Representative Tom Cole, Republican of Oklahoma and the chairman of the Rules Committee, said about the package.

But the rules could also make it difficult for the House to carry out even its most basic duties in the next two years, such as funding the government, including the military, or avoiding a catastrophic federal debt default.

Here is a closer look at the package:

An easy ouster for the speaker

Perhaps the most discussed change in the rules is the restoration of a provision that permits a single lawmaker to force a vote to “vacate the chair,” allowing a snap vote to remove the speaker.

Historically that had been the position of the House, but lawmakers refrained from employing that weapon until 2015, when hard-right Republicans used it as a threat to force out Speaker John A. Boehner. Democrats then changed the rules to necessitate that a majority of House members get behind the motion; Republicans have now reverted to requiring a single member.

McCarthy had hoped to keep the threshold higher, proposing that at least five members of the House must make the motion. But he relented under pressure.

Because a motion to vacate would be “privileged,” it could be raised and receive a vote at any time, whether House leaders wanted it to or not.

The rules open the way for new committees to explore the nation’s competitiveness with China, examine what Republicans called “the weaponization” of federal law enforcement agencies in politically charged investigations and assess the federal government’s handling of the coronavirus pandemic.

Reining in spending and taxes

The package imposes rules to try to limit spending, including blocking consideration of legislation that would increase mandatory spending, which is how many social safety net programs are financed.

Republicans are also requiring a supermajority vote of the House to raise taxes. In a provision that could make it easier to cut taxes, the new rules direct congressional budget offices to try to calculate the “macroeconomic” effect of tax reductions, an approach that could lower the estimated impact of tax cuts on the federal deficit. The rules also call for legislation to be judged for its potential contribution to inflation.

The package also includes adoption of the so-called Holman rule, which allows lawmakers to use spending bills to defund specific programs and fire federal officials or reduce their pay.

Setting the stage for a debt limit showdown

Facing a looming confrontation over raising the federal debt limit in the coming months, Republicans eliminated the so-called Gephardt rule, which in the past has allowed the House to skirt a vote on the politically charged issue and automatically increase the federal government’s borrowing power. Republicans intend to try to leverage their future consideration of any debt increase to obtain steep spending cuts, something they could not do under rules that allowed an automatic increase.

A more transparent — and slower — process

Under their new rules, Republicans will allow lawmakers at least 72 hours to review legislation before it goes to the floor for a House vote, responding to a chief complaint of members who have been angered by voluminous, costly legislation offered up at the last minute as a take-it-or-leave-it proposition. Such requirements have existed in the past, however, and have often been waived when time was short.

The rules put in place other technical changes framed as efforts to improve transparency around legislation by trying to restrict measures to a single topic and making it easier to eliminate provisions in a bill not considered germane to the main focus. Facing the prospect of more votes on amendments in the months ahead as Republicans try to open up the House floor, the rules also allow the party to give lawmakers just two minutes to record their votes when the leadership decides such a time limit is necessary. The shortest time frame previously was five minutes.

The rules could hamper investigations by the Office of Congressional Ethics, which undertakes bipartisan inquiries and then makes recommendations for discipline to the Ethics Committee.

One rule imposes term limits for board members, with the result of removing all but one Democrat from the board at a time when it is considering whether to open an inquiry into certain Republican congressmen over their conduct related to the Jan. 6 attack on the Capitol. The rules also require the board to approve the hiring of investigators within the first 30 days of a new Congress, which some ethics watchdogs fear could cause the office to go understaffed if hires are not made within that window. (Republicans contend that the rules ensure investigators are accountable to the board.)

“These are measures that will render the ethics office ineffectual and which no member, from either party, should support,” said Craig Holman, a government affairs lobbyist with the watchdog group Public Citizen.

The rules approved on Monday end proxy voting and remote committee hearings for lawmakers, after Democrats put the practices in place at the start of the coronavirus pandemic in 2020. With their slim majority, Republicans will now need to keep lawmakers in Washington for longer periods to be certain they have the votes to advance their legislation.

The package also rolls back staff unionization, an effort that began in earnest during the previous Congress, and which Democrats passed legislation to facilitate.

House Republicans also used the rules package to bolster their policy agenda, including a focus on supporting fossil fuel development and trying to restrict the Biden administration from drawing down the Strategic Petroleum Reserve. The package specifically allows consideration of legislation to require that any future release of oil from the reserve be contingent upon oil production on federal lands in the United States.

The measure is unlikely to win support in the Senate or with President Biden, who as a candidate vowed to end new oil and gas leases for federal lands and waters.